By: Michele A. Matthews, Co-Owner of MAM Squared, LLC.

“For all of the most important things, the timing always sucks. Waiting for a good time to quit your job? The stars will never align and the traffic lights of life will never all be green at the same time. The universe doesn’t conspire against you, but it doesn’t go out of its way to line up the pins either. Conditions are never perfect. “Someday” is a disease that will take your dreams to the grave with you. Pro and con lists are just as bad. If it’s important to you and you want to do it “eventually,” just do it and correct course along the way.” –Timothy Ferriss, “The 4-Hour Workweek”

This quote, this sentiment just really spoke to me because I couldn’t agree with Tim Ferriss more!

Every single day as God made Moses someone I know (a relative, friend, former colleague—or a combination of those two—an old boss, a friend of a friend…you get the gist) says “Someday after [insert some major life event or lofty, unrealistic happenstance like ‘when I win the lotto’ here], I’m going to step out on faith like you and start my own business!” I normally smile, nod and say “that’s great!” That is, after all, the polite thing to do, right? I hope so because it isn’t at all what I really want to say to that person at that moment, but I’ve been working on my tact largely because I learned the hard way—unlike what my mother told me when I was growing up—being frank often is being insulting. So, in the name of all that is tactful, I don’t dare say what I really want to, which is “oh get off it, someday is never and I mean NEVER gonna come!” 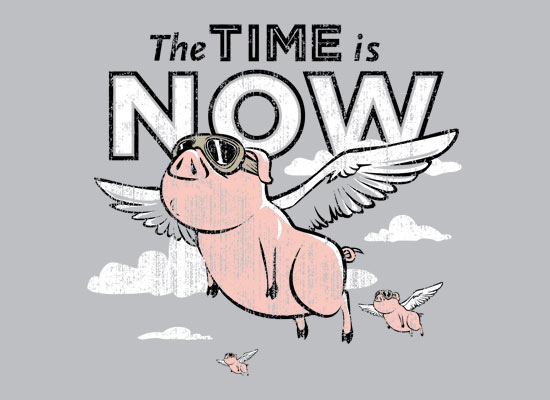 Harsh, I know, but it’s TRUE; there will always be a reason why you cannot start your own business, but if you’re serious about doing it, you’ll take a stand—set a deadline and stick to it. Or, seize the opportunity when it presents itself even in the slightest possible way. That, my dear fellow business owners/entrepreneurs/starters (or ‘wantrapreneurs’), is how I ended up founding Agitate Media with no financial backing, only a few promising (and, as I learned later that year, not-so-promising) prospects and all the enthusiasm I could muster in June 2011. You read that correctly; at most, I had $500 in the bank, a six-month-old HP laptop and just sheer determination.

I would bet money that I know what you’re thinking right now and that is “well, she probably didn’t have any bills or responsibilities to think about…that’s why she could throw caution to the wind…that’s got to be it!” And, while I totally understand and even respect your need to placate yourself because you’ve lobbed excuse after excuse at anyone who dare challenge you to stop talking about it and be about it, that is not the case. In fact, it’s the furthest possible thing from the truth. At the time that I launched my company full-time, I was about five months out from a budget-cut induced layoff from a pretty rad national healthcare association (that clearly did not have any love for middle management as they let us ALL go in one day…cold-blooded I know, but a story for another day) and just two days removed from the implosion of the small, public-engagement firm that was my well-loved, work-from-home rebound job. So, my money was funny and I had a $1,420-per-month rent, $158-per-month cable and internet bill, unpredictable gas and light bills not to mention one unemployed and two underemployed house guests. It was just a now-or-never moment; I felt the necessary urgency and push/pull to start my business right then, five years prior to when I initially intended to do it.

I want to be clear that I am, by no means, saying that the time was right—whatever that means or whenever that is. I am saying that after working with what, for all intents and purposes, was a failed startup; attempting what undoubtedly would have been a failed partnership and escaping relatively unscathed, the premise of going back into the traditional workforce was NOT an option for me. I am also not saying that it was a cakewalk; it was and is not by any stretch of the imagination, easy.  I have a file filled with unsuccessful proposals and a former client roster that is as long as some people’s grocery list; some of those relationships are in great shape with them (my former or occasional clients) revisiting my services and expertise from time to time. While, others did not end so well due to errors in judgment on both ends, fatal flaws, unsavoury business practices, etc. (all things I’ll discuss in tawdry detail on this blog I’m sure). We can suffice it to say that though it’s been a rollercoaster ride—a wild one at that—the rewards have outweighed and continue to outweigh the pitfalls. Becoming a small business owner has really built my character and resolve and contributed to both my personal and professional growth.

And, I’m not alone in that. My sister and business partner, Melissa, is a testament to that.  You can read all about her journey and lessons learnt in our Back to [Business] Basics posts on this blog and on her blog (the online voice of our subsidiary, mAmLtDaRt), mAmLtDaRt Musings. While writing this, I was also reminded of a relatively young entrepreneur’s journey that has been riddled with ups and downs, but through it all, she has stayed true to her dream of being a business owner and weathered the many storms she has encountered over the years. Her name is Ria Ramkissoon and I heard her story for the first-time at the first-ever TEDxPortofSpain, just six months after starting my business and just six weeks after relocating to Trinidad as a way to outsource myself and maximize my income. Here is her story (a must watch if you doubt your ability to push through and reach for your dreams):


I guess my point is that if you keep putting your starter/entrepreneurial goals off until tomorrow, or “someday,” you will take them to the grave and your legacy is worth so much more than a list of should’ve, would’ve, could’ves!

Michele A. Matthews is the founder  and managing director of  Agitate Media and Co-owner of MAM Squared, LLC.

A Peek into The MAM Squared Mind

All feature images of Melissa A. Matthews & Michele A. Matthews-Morancie were taken by Marlon James.

Get in Touch w/ MAM Squared